Warning: "continue" targeting switch is equivalent to "break". Did you mean to use "continue 2"? in /homepages/3/d105520502/htdocs/tomstanks/wp-content/themes/jupiter/framework/includes/minify/src/Minifier.php on line 227
 Fluval 5 Gallon Spec V Emersed Start – Tom's Tanks 
Warning: count(): Parameter must be an array or an object that implements Countable in /homepages/3/d105520502/htdocs/tomstanks/wp-includes/post-template.php on line 284

Everyone’s talking about starting planted tanks emersed with certain varieties of plants (Hermianthus calltrichoides “Cuba” or Dwarf Baby Tears and Glossostigma elatinoides, specifically) so I thought I would give it a swing in a couple of situations. One of these is a 5 Gallon Fluval Spec V I procured back in April from a gentleman on Craigslist NYC who’s girlfriend didn’t like fish. I invited him to bring her over to my apartment. He declined.

Anyway, I go home throw and out the plastic plants and acrylic gravel, put in some Flourite, a couple of small Echinodorus and a piece or two of driftwood with a moss mix, and let it marinate. 3 weeks and 6 50% water changes later I added some baby Nannostomus trifasciatus who had survived my missing some ghost shrimp in another tank, and all seemed well.

I pretty much left it alone until The Move, and it was sitting dry until last week after I received the big October Order. As I have mentioned elsewhere, I’m not a huge “aquascaping” guy in the traditional sense, in that I’m more interested in growing the crap out of some plants and seeing how big/tall/red/dense they can get. That being said Liz gets me all of the Amano books, it’s a reliable holiday grab, and I like me some iwugami. I didn’t want to go nuts with picking rocks living in the woods; that can get you crazy (especially when it’s 99% granite) and with foliage season all of my usual rock-theft areas are congested with looky-loos. So I went with 3 pieces of quartzite with a nice black and planted 2.5 3″ pots of Hermiantus calltrichoides and .5 3″ pot of Glossostigma elatinoides, soaked it, wrapped it up and had been running it on a 10 hour a day light cycle (10x 3w 6500K Greenworks LED) and spraying it with a solution of water mixed with some Seachem Flourish Excel and Flourish Comprehensive.

Now I had The Big Staurogyne repens find and adjusted things slightly to add .75 bag (3 “clumps” of TC from Petsmart; I’ve had good luck with the Topfin line, once it’s in the bag it’s pretty hard to fuck up unless you crush it, slow-starting but vigorous once it gets it’s bearings. That’s the picture you see here.

I’ll adjust the dosing if things look wacky, and post an updated pic when things change, maybe in a week.

We're not around right now. But you can send us an email and we'll get back to you, asap. 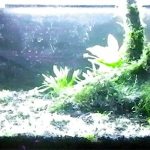